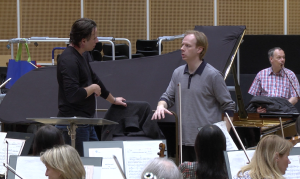 my trip to Europe this time is nearing its end, and since I have been away from home for quite a while it sure will be nice to sleep in my own bed in just a few days. Of course, traveling and playing is exciting in many ways, but the rootlessness that comes with long travels can be tough to get through.

The last stop on this trip is Leipzig, Germany. This is the city of Bach, Goethe, Mendelssohn, Mahler and many more. It was also, of course, bombed by the allies during the war and part of the GDR during the cold war. Lots of history in these streets.

Actually, yesterday I had an experience that somehow felt like a survival of the GDR era … I had been told that there was wireless internet that I could use in the canteen of the Gewandhaus, by getting a paper with login and password. Alright, good. I ask about this in the canteen, and they tell me to go down to the reception by the staff entrance. Alright, I walk down the stairs to this place. There are two women, one of them is very friendly and immediately wants to give me the password paper but she is stopped abruptly by the second woman, who interrupts her and explains to me that I must go to “office number 309” and speak with “Herr Lehman” for this internet password paper.

A little puzzled that it is such a big drama to receive a password to their internet I walk back upstairs; after two flights of stairs I start looking for office number 309. The man I ask for directions says “but that paper you should get at the reception.” I told him that they did not want to give it to me without Mr. Lehman’s permission. He sighs, calls the front desk and says “there is a gentleman coming to you that must have an internet password”. Good.

When I come down, I get the coveted piece of paper with login and password, wohoo!. But… only if I write down my name, full address and my phone number. A bit strange, no?

Now it’s Saturday and I’ve had two of my three concerts in Leipzig, it’s like I am having an Artist in Residence with the orchestra, which is great. The first concert I played with the orchestra was in a so-called “Black Box” where we performed a piano concerto by fellow Swede Karl McFaul, the concerto is called the “Drum and Bass Concerto” because it contains digital drum loops which Karl himself controls from a keyboard. It is really cool, actually. In the midst of one of the most frenetic passages, something very unscripted happens: the lamp for my score, attached to the music rest, falls down into the Steinway: BOOM! To my own surprise, I just keep playing, with half a lamp hanging over your hands. It was kind of “the show must go on”-moment. This is recorded on video, so I want to get hold of it and be able to show you, it looks very funny.

Here is me and the composer McFaul listening to the sound in the control room of the radio station:

The second concert was a piano recital with two Beethoven sonatas and some Lyric Pieces by Grieg. Grieg lived in Leipzig during a large part of his live, did you know that? It is incredible when you start to discover the cultural history of this city: Bach, Goethe, Mendelssohn, Mahler, Robert and Clara Schumann, Grieg and many more. Amazing.

Now I am waiting for the evening to come so that I can fall asleep, wake up early and play Wilhelm Stenhammar’s gigantic piano concerto in front of 2,000 people in a sold-out Gewandhaus … At 11 o’clock in the morning.

The day started early with breakfast at 6:30, then a morning walk after which I went to the concert hall and practiced a little, it felt great. Then time was flying, and before I had time to say “Stenhammar”, it was quarter past eleven and I was waiting behind the stage to go on stage for the first time in the famous Gewandhaus, a little nervous after all. But once you get started and begin playing the tension is gone and it was lots of fun.

Here is the very beginning of the concerto, with the radio announcer calling me a “junge pianist” HA!